I looked up Midsummer Night in the dictionary and on Wikipedia because all I knew about it was Shakespeare's Midsummer Night's Dream, which I've never read or seen.

I found that worldwide celebrations mark the summer solstice on Midsummer Day--sometime between June 21 and 24, depending on the culture.  Traditionally, it was believed that witches and other supernatural beings took over the night before--Midsummer Eve--causing widespread mischief.

While all that was going on around the world, The Mother Kitty enjoyed a quiet moment during her evening walk.

Here is her Midsummer Night.

When Lily is ready to jump from any high surface, she always makes an official launch.
Posted by Melissa Connolly at 12:16 AM 4 comments:

The Kitties and I are thrilled about the start of the new season of "So You Think You Can Dance." To celebrate, The Kitties pay tribute, here, to one of our favorite dances from last week's opening show. Choreographed by past contestant Travis Wall, the joy of this dance swept us all away.


Here is the dance performed by the final five contestants to be selected for the competition: Ryan [Lily], Mitchell [B.J.], Ashley [Ashes], Alexander [Gordon] and Caitlynn [Mini]:

Posted by Melissa Connolly at 9:36 PM No comments:

Are you singing, eating cake, watching a Johnny Movie?
Find a way to toast Johnny Depp today on his 48th birthday!
Can you believe it's been a year since I started Johnny Kitties?  And I'm still in the '90s! The Kitties and I are having a fantastic time chugging along Johnny's filmography. Some drawings have been quick; some have taken weeks. (It's a good thing that this is only a once-a-month treat!) But what's the difference when it's a labor of love?

Speaking of love, what are the odds that my all-time favorite Johnny Movie would be posted on Johnny's birthday? I don't know what it means, but it's got to be more than a coincidence, don't you think?

Who is Gilbert Grape?
Because he had already read the wonderful book by Peter Hedges, Johnny Depp agreed to star in What's Eating Gilbert Grape? before the script was written.  "If Johnny had not said, 'I'll do it,' without a script, I don't think the movie would have happened," Hedges says. That would have been tragic!
What's Eating Gilbert Grape? chronicles a year in the life of Gilbert (Johnny Depp) in Endora, Iowa. Nothing much happens in Endora. It's the type of town you pass through, but Gilbert is tied to it in a life consumed by family responsibilities. He lives with his two sisters, his mentally challenged brother, and his morbidly obese mother, who hasn't left the house in years. Gilbert spends most of his time taking care of his 18-year-old brother Arnie (Leonardo DiCaprio), who has the mind of a 5-year-old and who doctors warn "could go at anytime." Gilbert's routines consist of working at the local grocery store, carrying on an affair with Mrs. Betty Carver (Mary Steenburgen), and having mundane conversations with his two buddies Tucker and Bobby (John C. Reilly and Cripin Glover) at the town diner.
Every year, Arnie and Gilbert wave to the annual parade of trailers that drive through town on their way to more interesting places. When one breaks down, Becky (Juliette Lewis) and her grandmother see Endora in a different light while waiting for their trailer to be fixed. Meeting the stranded strangers changes Gilbert's life, helping him see things a little differently too.
The One that Captured my Heart
By now, my parents realized that my loyalty to Johnny Depp was not dwindling. I was really excited that Johnny signed on for this movie because I admired the director, Lasse Hallstrom, whose great award-winning Swedish film, My Life as a Dog, I had somehow recently seen. To my great surprise, Dad suggested that we take the 90-minute drive to an artsy theater in Cleveland, the only theater in the vicinity showing What's Eating Gilbert Grape? Part of the deal was to stop by my dad's friends' house in Broadview Heights beforehand. They were happily surprised to see us, and shortly after our arrival, dad explained what brought on this sudden visit. Here's how that went:

Dad: "Well, do you know Johnny Depp?
Friends: "Yes."
Dad: "Well, Melissa is deeply in love with him."

Me: "Daaaaaaaad!!!!!"
Dad: "What?"
I don't remember the rest of that conversation. Maybe I fainted.
For the longest time, I referred to What's Eating Gilbert Grape? as The Best Johnny Movie Ever. Some newer Johnny Movies may have assumed that title for a while, but this remains in my heart as The One. I can't really articulate why I love it so much: Granted, I gravitate toward quiet, character-driven films. And, at the time, I lived in a town similar to Endora and understood Gilbert's frustrations of being stuck in the monotony. But I think Lasse Hallstrom put it best: "This film was a wonderful coincidence of the right people getting together with the right story at the right moment. I was very lucky for that." (Yes, we all are!)
Endora and its citizens are completely believable and recognizable. With a stellar cast, the acting is so natural that you can't help but think it's all real. In Endora, the big news is the impending arrival of Burger Barn, a fast food franchise. "They are cutting edge," Gilbert's friend Tucker says. "They use Canola oil! I bet you don't even know what that is!" Bobby runs the local funeral parlor with his father. When Gilbert asks him how business is going, he responds, "Not good. No one is dying." No wonder Becky, with her fresh perspective, is just who Gilbert needs.
When this film was released, two of its stars got all the press. There's no doubt that Leonardo DiCaprio deserved all the praise, awards, and Oscar nomination he received for his genius performance as Arnie. And, after being spotted on Sally Jesse Rafael's talk show discussing obesity, Darlene Cates scored the role of Mama, winning the hearts of audiences--and everyone around her--because of her remarkable spirit and bravery. She turned out to be a true natural. But I have to commend Johnny for his performance. So far, he had been playing film characters labeled "oddballs," "outsiders," and--Ugh!--"quirky." Some might consider Gilbert another outsider, but to me he's an ordinary guy stuck in extraordinary circumstances. Everything is internal with Gilbert, and Johnny's talent for saying everything with his eyes is on brilliant display. Writer Peter Hedges agrees: "In some ways it's the harder performance, particularly since, in the novel, he gets all the thoughts," he says. "There's so much life going on in his performance. I don't think there are very many actors who could have come close to what he did."
Every time I watch this movie--and I've seen it many, many times--I feel the same amount of emotion as the first time, and I find something different to love about it with each viewing.  Johnny feels differently: Once, he caught What's Eating Gilbert Grape? on TV and had to quickly change the station when he realized he began hyperventilating. He says of the filming experience, "I don't know if it was coincidental that I was going through this emotional turmoil or if it was something that, maybe--on some weird level--I had done to myself subconsciously because of what was required. But, anyway, I was kind of miserable at the time, and it's pretty plain to see."
Johnny modeled Gilbert after his childhood friend, Bones, which accounts for the red hair and crooked teeth. But I always felt that this character was very close to who Johnny really is. Maybe Johnny, helping to take care of his own mom while growing up in a small town with sights of a brighter future, understood Gilbert's frustrations a little too well. I could find a few parallels from his life but don't want to speculate about what only Johnny knows. What connected with me was that Gilbert was always trying to do the right thing, putting everyone else first and forgetting about himself. When Becky asks him what he wants, his response benefits only his relatives--until she interrupts,"What do you want for you, just for you?"
"I want to be a good person," he says, an improvised line that says it all.


The Kitties visit Endora.
Watching this film recently for Johnny Kitties, the latest ingredient I've come to love about What's Eating Gilbert Grape? is the amazing cinematography. Swedish cinematographer Sven Nykvist is a pioneer of the art who worked consistently with Igmar Bergman. "I loved the reverence that he inspired in people on the set," Peter Hedges remembers. "Everyone knew that they were in the presence of a master."
Deciding on and drawing a tribute worthy of What's Eating Gilbert Grape? was daunting: At first, I considered my favorite scene, Gilbert's first kiss with Becky. But Gordon and Ashes looked at each other and laughed. Next, I thought of the water tower scene, and Simon got very excited about the thought of climbing to the top. I ruled that out because of safety concerns. While the water tower scene is probably the most recognizable image from the movie, I prefer the quiet moments that make this film a gem. Since I couldn't just draw a picture of Gordon staring at something, I picked a scene at the lake.
True, this was a night scene, but it was filmed during the day and then darkened on film (by the master). Since the scene was so dark, I had to create some of my own background; then I just decided to make it lighter because what if you couldn't see it either? Chalk it up to artistic license. 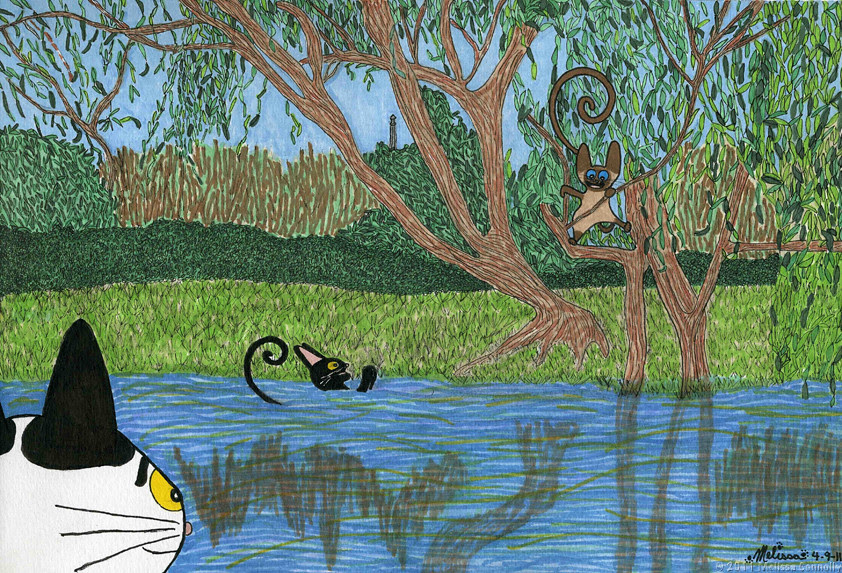 Following a frightening fight with Arnie, Gilbert runs out of the house to escape what he'd done. He eventually ends up near Becky's trailer and finds her in the lake. She's coaxing Arnie, who hadn't bathed for days after having a scare with water, to join her for a swim. For a moment, Gilbert manages a flicker of a smile. Maybe he's seeing what the next chapter in his life could be like.
Did I mention I love this movie?
What can follow Gilbert Grape?
Something completely different, of course: Johnny gets in a good mood, channeling Edward D. Wood, Jr.
Posted by Melissa Connolly at 9:16 AM No comments:

Lily's obsession with light and shadows is sort of my fault--mine, and the street lamp's outside.
Posted by Melissa Connolly at 8:39 PM 3 comments:

I wish I were disciplined enough to sit at a desk when creating my artwork. Typically, I'm sitting on my chaise lounge in front of the TV, surrounded by packs of pens and markers and hunched over the sketchbook on my lap.

When I draw, I tend to lose track of time--and Lily. When I think of it, I whip my head up to scan the room for her. Here is where I find her most often: across from me--almost always upside down--in her spot on the couch, with her Wubba always nearby. (I think she, too, has lost track of time.)