Last weekend, I flew to Columbus to celebrate my nephew's 8th birthday with family. I spent this week stuck on drawing last Sunday's scene--sitting on the couch with Norman cradled in my arms, both of us enjoying one of our unavoidable naps. (When I go home, I always think of it as time to refuel.) But drawing was fruitless: My human looked more dead than asleep. And, I couldn't keep from falling asleep after only a few pencil lines (and lots of erasing) each night I attempted to make progress.

Today is the first day I've felt back to normal--a noticeable incremental change that I must attribute to yoga. The first day back to class, it was as though I'd never done yoga before and I may not last the hour. The second day, I felt a little stronger. And, yesterday, I was at about 97%. I took the day off from class today and got back to drawing with a new idea.

No wonder Lily greets me like this every time she wakes from a nap (corkscrew tale typically included). Here, she demonstrates what she calls Downward-Facing Cat using my old mat, which she dug out from the bedroom closet. (Is that why she always wants to get in there?)
Posted by Melissa Connolly at 1:54 AM 1 comment:

It must be bath time.

This week's drawing took a while because Simon is meticulous about his projects in the garage. I'm not sure what contraption he's making or its purpose...or even if he's made up his mind about it.

But the music is blasting, and the creative juices are flowing. Last I checked, he was walking in circles, muttering to himself. He could be like this for days.

Posted by Melissa Connolly at 1:23 AM 2 comments: 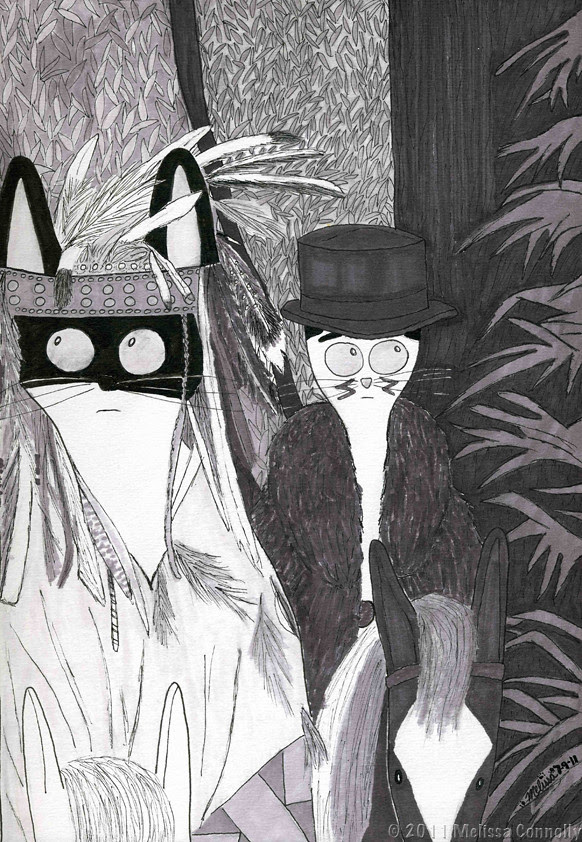 Here, Nobody (Norman) leads William Blake through the forest, on their journey to the spiritual world. In this scene, William Blake doesn't say anything but observes his surroundings. I always imagine he's looking at these gigantic ancient trees that were here before him and will remain here after him. There will always be things out there bigger and wiser than we are.
Maybe I'm reading too much into it, but it's that kind of movie.
Johnny and Jim take a little detour.
At the Cannes Film Festival where Dead Man premiered, Johnny and Jim Jarmush participated in another film called Cannes Man, a satire about a producer, Sy Lerner (Seymour Cassel, who--on a bet with a friend--picks a random guy off the street to promote and cons stars at the festival into signing on for his next project. Forget that there's no script, he tells them. It's going to be written by his latest discovery, Frank Rhino (Francesco Quinn), who he claims is the hottest young writer since Hemingway and Faulkner. Johnny plays it up as the typical Hollywood star with his temperamental director. Surrounded by bodyguards, they share drinks, cigarettes, and a bit of meditation amid the madness.
This film is full of cameos, but I think theirs is the best one. My favorite moment? Frank being instantly chummy with Johnny, putting his arm around him while Sy pitches their possible involvement in the project. (So inappropriate, right???) Johnny eventually acknowledges Frank during the discussion: "Hey, you know what? You're touching me. You're invading my personal space."
What's Next?
Johnny makes a miraculous recovery and goes undercover in Donnie Brasco.
Posted by Melissa Connolly at 8:26 PM No comments:

After an action-packed weekend in New York -- celebrating with Sting on his birthday, catching the latest scoop from the cast of "Arrested Development," experiencing my first Jon Brion show, and sharing fun times and yummy meals with good friends -- all I wanted to do was hibernate when I returned home.

Luckily, The Kitties made some room for me under the blanket.