Johnny Kitties was a monthly blog series of illustrations, featuring The Kitties, that celebrates Johnny Depp and his films. Launched on June 9, 2010, Melissa's Kitties published a new Johnny Kitties blog post on the 9th of each month until June 9, 2014, when I caught up to present day. Read my first post about the Johnny Kitties series for more details on the challenge.

Since June 9, 2014, new Johnny Kitties illustrations are added to this series sometime after the DVD release of Johnny's films. Once published on Melissa's Kitties, the blog post will be added here.

To view the series so far, you'll find Johnny's filmography listed below. Click the  film title to go to the original blog post. Enjoy! 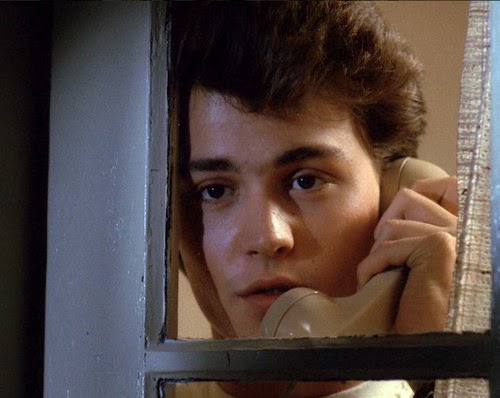 1. A Nightmare on Elm Street (1984). In his film debut, Johnny falls asleep, meets Freddy Krueger, and dies. Thanks, teenage daughter of Wes Craven who convinced her dad to cast the "dreamy" guy who auditioned earlier. Good call!

3. Slow Burn (1986). Johnny plays a teenage kid in this movie, has three scenes, and meets a grisly end – which  is disappointing.


4. Platoon (1987). Johnny makes his first trip out of the country for a small role in this Oliver Stone Oscar winner. I prefer to think his character lives. This weekly, hour-long drama about young-looking cops who go undercover in high schools to fight crime introduced me to Johnny. His character, Officer Tom Hanson, couldn't be more different from Johnny, and he hated his newly FOX-manufactured role as the show's teenage heart-throb attraction. By the end of his four-season run with it, even I could tell he had his eye on a brighter horizon. But having Johnny in my living room every week was fantastic while it lasted. I loved this show, so a tribute to each season is included in this filmography challenge.

Back to the Movies...

5. Cry-Baby (1990). This John Waters classic musical satire about juvenile delinquency in 1950s Baltimore helped Johnny break his unwanted TV persona. "Stick with us, we'll take care of that," the director promised. They did!

6. Edward Scissorhands (1991). Johnny meets Tim Burton and the rest is movie history. In this fairytale, a manmade boy with scissors for hands is discovered by the local Avon Lady, who brings him home and introduces him to her family and gossipy friends.

7. Arizona Dream (1992). This wonderful, strange coming-of-age story about a drifter who is forced to return home for his uncle's wedding boasts a stellar cast, including Jerry Lewis, Faye Dunaway, and Lili Taylor.

8. Benny and Joon (1993). Johnny performs fantastic Buster Keaton tricks in this movie about a drifter who falls in love with a mentally challenged woman and has to deal with her over-protective brother.

9. What's Eating Gilbert Grape (1993). This movie, about a guy stuck in a small town taking care of his needy family, is etched in my heart and earned Leonardo DiCaprio an Oscar nomination.

10. Ed Wood (1994). Tim Burton's wonderful, loving tribute to the worst film director of all time earned Martin Landau an Oscar for his portrayal of Bela Lugosi.

11. Don Juan DeMarco (1994). Johnny thinks he's the greatest lover of all time, and his psychiatrist, Marlon Brando, starts to believe it.

12. Nick of Time (1995). A father is forced into an assassination plot to save his young daughter from kidnappers. How would you feel if Christopher Walken was threatening you?

13. Dead Man (1995). In this Jim Jarmusch classic, a straight-laced accountant gets shot and turns outlaw on a sprawling journey of discovery with an entertaining Native American guide. 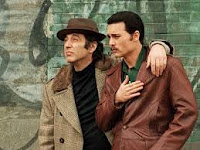 14. Donnie Brasco (1997). Al Pacino costars in this character study of an undercover FBI agent working to take down the New York mob.


15. The Brave (1997). Johnny's directorial debut depicts a poverty-stricken Native American who agrees to give his life for money to support his family.

16. Fear and Loathing in Las Vegas (1998). Johnny works with Terry Gilliam and transforms completely into Hunter S. Thompson, which is the reason to watch this one.

17. The Astronaut's Wife (1999). After an accident in space, Astronaut Spencer Armacost returns to Earth but doesn't seem quite the same. 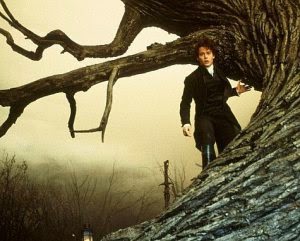 18. The Ninth Gate (1999). Directed by Roman Polanski, this film follows a book dealer who ends up making a deal with the devil.

19. Sleepy Hollow (1999). Ichabod Crane hunts for the Headless Horseman in Tim Burton's version of this classic tale. What would you do if Christopher Walken were threatening you – without a head?

21. Before Night Falls (2000). Johnny has two cameo roles in Julien Schnabel's beautiful and devastating film about the Cuban poet/novelist Reinaldo Arenas's struggle for artistic freedom. One is as an evil policeman and the other is a jailed transvestite with special talents.

22. The Man Who Cried (2000). Christina Ricci stars as a Russian Jewish woman on a journey to find her father and a new life in the 1920s. Johnny is the quiet gypsy who captures her heart – at least for a while.

masters a Boston accent, which I appreciate.

24. From Hell (2001). The police enlist the help of a clairvoyant to catch Jack the Ripper before he commits more murders. 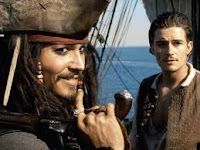 25. Lost in La Mancha (2001). In this fascinating documentary, Terry Gilliam prepares for his next film, of which Johnny planned to costar, but it never quite gets off the ground for a number of improbable reasons.

26. Pirates of the Caribbean: The Curse of the Black Pearl (2003). Johnny scores his first Oscar nomination for his role as a pirate like no other in this fun-filled, swashbuckling, supernatural adventure. I am thrilled!

27. Once Upon a Time in Mexico (2003). In the third installment of Robert Rodriquez's Western trilogy, Johnny plays a corrupt, self-absorbed CIA agent. I wasn't looking forward to seeing this movie after hearing about all the guns involved and that Johnny somehow loses his eyeballs, but the action-packed story and Johnny's funny performance completely won me over.

28. Secret Window (2004). In this Stephen King story, a reclusive writer deals with a threatening stalker who claims he stole his work.

29. ...And They Lived Happily Ever After (2004). Johnny makes a memorable cameo n this French comedy/drama about love and relationships.


30. Finding Neverland (2004). I love this inventive biopic about James Barrie's struggle for artistic inspiration, which leads him to writing Peter Pan. Johnny earned his second Oscar nomination for his understated performance. I am ecstatic!

31. The Libertine (2004). In this gritty period drama about John Wilmot – an outspoken writer, popular wit, and favorite of the King Charles II – and the struggle through his drunken, promiscuous, prolific life, Johnny does some of his best acting ever. This movie is not always easy to watch, but I love it every time I see it.

32. Charlie and the Chocolate Factory (2004). Tim Burton brings out the darkness of this Roald Dahl's classic and introduces it to a new generation.

34. Pirates of the Caribbean: Dead Man's Chest (2006). Captain Jack Sparrow battles Davy Jones and loses the Pearl in this sequel to the 2003 surprise hit. I can't believe Johnny's in a sequel.

35. Pirates of the Caribbean: At World's End (2007). This Pirates adventure concludes with Captain Jack escaping Davy Jones's Locker and helping Will and Elizabeth find everlasting happiness.

36. Sweeney Todd: The Demon Barber of Fleet Street (2007). This Tim Burton masterpiece earned Johnny his third Oscar nomination for his turn as the Stephen-Sondheim-singing, serial-killing barber. I am delirious!

37. Public Enemies (2009). This gun-filled, stressful bio-pic of John Dillinger (Public Enemy #1), which recounts his final days with the FBI hot on his trail, is grounded by Johnny's authentic performance.

38. The Imaginarium of Doctor Parnassus (2009). When Heath Ledger died, Johnny, Jude Law, and Colin Farrell stepped in to make their friend's final role complete in this crazy, entertaining Terry Gilliam film about a father's deal with the devil for immortality.

39. Alice in Wonderland (2010). Tim Burton puts his stamp on Roald Dahl's classic tale with Johnny as the Mad Hatter.

40. The Tourist (2010). The meeting of a bumbling American tourist and a mysterious woman leads to a light-hearted spy thriller in beautiful Venice.

41. Rango (2010). This sharp, funny cartoon Western about a confused chameleon stuck in a desert town that's running out of water showcases Johnny's vocal talents and sparkling animation that earned it a well-deserved Oscar for best animated picture.

42. Pirates of the Caribbean: On Stranger Tides (2011). Rebooting the franchise, Captain Jack Sparrow appears in a new story on the hunt for the fountain of youth. I can't believe Johnny has a franchise.


43. The Rum Diary (2011). This episodic adaptation of Hunter S. Thompson's first novel, which reflects the writer's real-life early days as a reporter in Puerto Rico struggling to find his voice, was a labor of love for Johnny to make in honor of his friend and mentor.

44. Dark Shadows (2012). Tim Burton's tribute to the 1960s campy soap opera is a comedy about a scorned servant girl who turns her lover into a vampire and traps him in a coffin for 200 years. When he escapes, he finds himself in the 1970s and introduces himself to his descendants.

45. The Lone Ranger (2013). Tonto tells the story of his friend John Reid and how the legend of the lone ranger came to be.

46. Transcendence (2014). An artificial intelligence pioneer becomes a cog in his own machine when he uploads his mind into a super computer and things get out of control.

47. Tusk (2014). When a podcaster in search of a good story visits a stranger with one to tell, he finds himself trapped with a madman who wants to turn his new friend into a walrus. That's right...

48. Into the Woods (2014). Follow your favorite fairytale characters on a new adventure in this film adaptation of Stephen Sondheim's musical. But beware the Big Bad Wolf!

49. Mortdecai (2015). Charlie Mortdecai, an aristocratic art dealer, is thrown into a caper involving a stolen painting and Nazi gold. Will it turn out all right in the end?

51. Alice Through the Looking Glass (2016). The Mad Hatter's in trouble and only Alice can save him and his family in this time-traveling adventure in Wonderland.

52. Yoga Hosers (2016). Catch up with the Colleens from Tusk as they treasure their phones and team up with Guy LaPointe to fight off Brazis in this crazy Kevin Smith comedy.

53. Pirates of the Caribbean: Dead Men Tell No Tales (2017). The past catches up to Captain Jack and company, as they uncover well-kept secrets, fight off vengeful ghosts, and aim to end all the curses that haunt them.

54. Murder on the Orient Express (2017). Johnny better watch his back among this wonderful ensemble cast in this remake of Agatha Christie's classic murder mystery.

55. Sherlock Gnomes (2018). Sherlock is on the case when all the local gnomes in London disappear in this fun sequel to 2011's Gnomeo & Juliet.