The kitties are gettin' down to some funky music by the master. 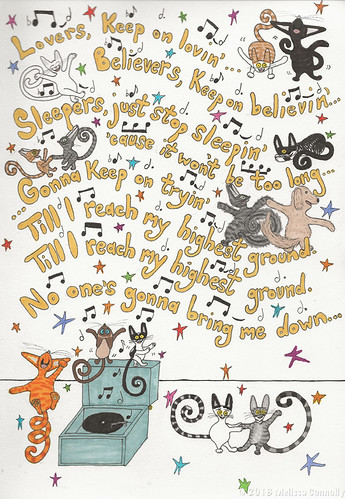 And, here's the real thing. The video quality may not be great, but it's all about the music and outfits anyway. Turn it up!

"Higher Ground" by Stevie Wonder, live on The Beat Club, 1974
Posted by Melissa Connolly at 8:23 PM No comments: 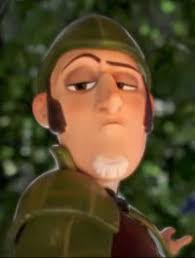 "I became addicted to watching these animated films when my kids were little....Well, cartoons break all the laws, don't they? That's the beauty – seeing those parameters broken and trying to figure out a way to break the parameters of cinema in that same way, so that a character can be potentially accepted in the same way Wile E. Coyote is when he gets crushed by a boulder and they cut to him with a little bandage on his head." Johnny Depp

Sherlock's on the case.
When garden gnomes Gnomeo and Juliet (James McAvoy and Emily Blunt), their families, and friends move from Stratford Upon Avon to London, they struggle to adjust to their new home. After an argument leads them out of their yard, Gnomeo and Juliet return to find it empty and ruined. In this sequel to 2011's Gnomeo & Juliet, they help Sherlock Gnomes and Dr. Watson (Johnny Depp and Chiwetel Ejiofor) rescue all the missing garden gnomes in London, including those closest to their hearts.

I love happy surprises.
It occurred to me the week before Sherlock Gnomes was released that I should see Gnomeo & Juliet first; luckily, I found it on TV. While it's clearly for little kids, I thought it was really cute. I loved its spin on Shakespeare's tale, and I was shocked to discover its great cast – including Emily Blunt, James McAvoy, Michael Caine, and Maggie Smith – let alone that Elton John produced and provided a bunch of music for it. How did I miss this one?

When Sherlock Gnomes came out, I had become recently unemployed because of unexpected budget cuts and project delays at my newest job. Johnny came to my rescue, as usual, lifting my spirits with this silly and sweet sequel. Out of nowhere was an online article offering free tickets to a preview of Sherlock Gnomes at a local theater. I'll take it! 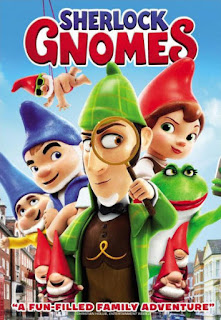 By the time I arrived, a line of mostly parents and well-behaved kids had already formed, but once in the theater, I slid into the second row, which was full of adults who were there at their own will. I guessed that they were either Johnny fans or movie critics. That night, this cartoon really made me laugh with some funny lines from friends Benny (Matt Lucas) and Nanette (Ashley Jensen) and Sherlock's arch-nemesis Moriarty (Jamie Demetriou). When I saw it again at home to work on Johnny Kitties, I didn't laugh as often (maybe because I was more focused on finding the inspiration for my illustration), and I thought that Moriarty's evil plan was just that.

Still, I really appreciated the film's message about the importance of prioritizing family and friendship over everything else. I enjoyed meeting new characters too, including Sherlock's old flame Irene (Mary J. Blige). This film has plenty of funny, vivid moments: I liked seeing London, including Chinatown and various galleries, from the gnome perspective on their adventure in the city. "London offers so many great scenarios in so many different locations that it seemed it'd be great to use London as a backdrop," producer Elton John says. "It's a love letter to London, really." Of course, I also loved all the Elton John songs and special gnome-style appearances.

Apparently, Elton and Johnny are old friends. (Of course they are.) Elton asked Johnny to join this cast and sent him the script. "I didn't expect the script to make me laugh out loud," Johnny says. He and director John Stevenson worked collaboratively throughout the recording sessions, improvising and adding more humor wherever they could. For his fun performance, which was recorded in 2015, Johnny was inspired by his favorite Sherlock, Basil Rathbone. "There have been so many variations of the character of Sherlock Holmes," he says. "I wanted him to sound as if he were pointed very sharp, that he was sharp-angled. His brilliance came out of clumsiness in a way. I wanted Sherlock's voice to be like a razor blade. It could cut through anything annoying – anything he found annoying." I hear it!

The Kitties peak into Sherlock's mind.
All of the Lucky Cats in the Chinatown scenes would have been a fitting choice, but my favorite scenes in Sherlock Gnomes invited us viewers into Sherlock's mind. These detailed black-and-white scenes were a refreshing contrast to reality and showed how Sherlock processed information from the outside world. I laughed when Sherlock lost interest in Gnomeo's ideas and floated into a daydream until he stopped talking. We've all been there, done that. Here are Ryo-oh-ki, Tyrone, and Mew as Dr. Watson, Gnomeo, and Juliet while Gordon, as Sherlock, imagines where he'd rather be right now. 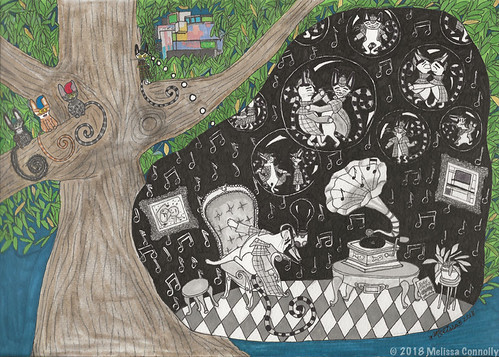 What's next? I am pacing the floors, waiting to see Johnny in Fantastic Beasts: The Crimes of Grindelwald, which will be released next Friday, November 16! See you there!

Some of Ryo-oh-ki's haircuts are an acquired taste.

Posted by Melissa Connolly at 8:40 AM No comments:


Posted by Melissa Connolly at 11:49 PM No comments: